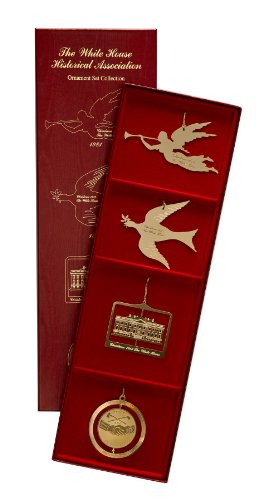 This set includes the first four White House Christmas ornaments which are no longer sold individually. 1981 Angel in Flight, The First White House Ornament. 1982 Dove of Peace, honoring George Washington, First President of the United States, 1789-97. A faithful miniature replica of the dove of peace weathervane that Washington commissioned for his home at Mount Vernon. 1983 The White House, Honoring John Adams, Second President of the United States, 1797-1801. Adams was the first president to live in the White House and the ornament depicts the north facade of the house as he would have known it, before the addition of the columned portico so familiar to us today. 1984 The Jefferson Peace Medal, honoring Thomas Jefferson, third President of the United States, 1801-09. The design is based upon the historic Jefferson peace medal, minted in 1801. President Jefferson’s portrait is featured on one side and the opposite side shows the clasped hands of an Indian and a soldier, crowned by a tomahawk and a pipe of peace. Each original White House Christmas ornament is finished in 24-karat gold. The 1981-1984 ornament set is packaged with four brochures: one for each ornament describing the inspiration for its design and relevant historical background.