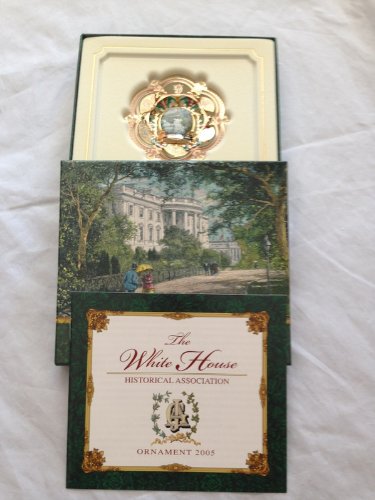 The 2005 keepsake White House ornament honors the 20th President of the United States James A. Garfield. His term of office, which began in March 1881, ended tragically in September of the same year when he died more than two months after being shot twice by an assassin. The design of the James Garfield White House ornament is reflective of Garfield’s personal style as well as the style of the Victorian period during which he served as president. It is comprised of a round ceramic stone featuring a period illustration of the South Front of the White House surrounded by a highly decorative wreath made of gold-finished brass. The colors and intricate motifs used to decorate the wreath are derived from the décor and collection of Lawnfield, the president’s home in Mentor, Ohio. President Garfield’s monogram, “JAG,” featured at the bottom center portion of the wreath, is reproduced from his inaugural ball decorations.