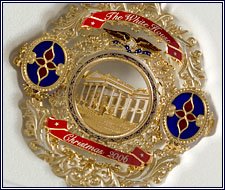 The 2006 White House Christmas ornament honors the administration of the 21st President of the United States Chester A. Arthur (1881-85). Having served just six months as vice president to James A. Garfield, Arthur assumed the presidency in September 1881 when Garfield succumbed to the wounds inflicted by an assassin’s bullet. He brought to the White House a luxurious style that signaled the nation’s return to prosperity after the economic troubles of the late 1870s. The design of the 2006 ornament is inspired by the period motifs and rich decor of Arthur’s White House, which will be forever distinguished by the early work of famed American artist and decorator Louis Comfort Tiffany. The North Portico of the White House is depicted in the center beneath an American bald eagle. The two translucent ovals flanking the center depict the American dogwood blossoms that Tiffany incorporated in a large screen of red, white, and blue glass, which stood in the Entrance Hall until the turn of the century. The naturalistic leaves that comprise the gold-plated outer wreath of the ornament are derived from murals painted in the Entrance Hall. The honeysuckle details (“anthemia”) in the inner oval frame are adapted from the high Victorian decoration of the East Room.