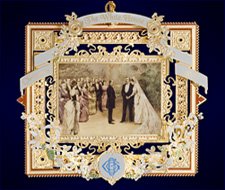 The 2007 Official White House Christmas ornament honors the first administration of President Grover Cleveland. The only U.S. president to serve two non-consecutive terms, Cleveland served as the 22nd president from 1885 to 1889 and as the 24th president from 1893 to 1897. Cleveland was also the only president to marry in the White House. In 1886, the 49-year old bachelor married 21-year old Frances Folsom in a small ceremony in the Blue Room. The historic event is the focus of the White House Christmas ornament for 2007. The central illustration is a tinted reproduction of an engraving that originally appeared in Frank Leslie’s Illustrated Magazine depicting the bride and groom taking their vows. The gold-finished frame surrounding the engraving showcases design elements from the Cleveland’s wedding certificate album. The groom’s monogram, anchors a decorative border.