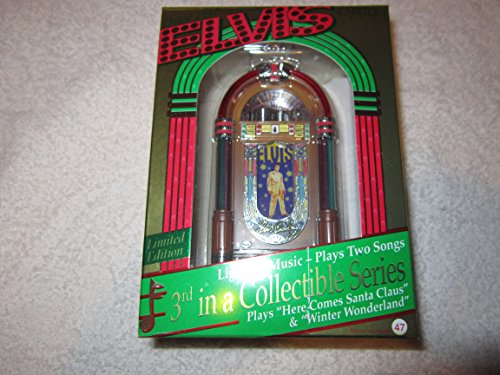 Elvis Presley’s music has entertained millions of fans around the world and has made him one of the most popular performers of all time. He has earned gold, platinum and multi-platinum awards for 11 different albums and singles – more than any other artist or group, and has had 149 of his songs on Billboard’s Hot 100 Pop Chart (114 in the top 40, 40 in the top 10, and 18 #1 songs). Elvis’ songs were frequent on the country, R&B, and gospel charts as well. In addition to his success with the record-buying public, Elvis frequently recieved recognition from his peers in the music industry. The National Academy of Recording Arts and Sciences nominated him for 14 Grammy Awards, and in 1971, at the age of 36, presented Elvis with the Grammy’s Lifetime Achievent Award. This fine ornament is a loving tribute to Elvis’ music and the joy it has brought to his millions of fans over the years. It features Elvis’ authentic autograph and will add a bit of rock ‘n roll style to your Christmas tree for years to come! It plays the songs “Here Comes Santa Claus” and “Winter Wonderland”.