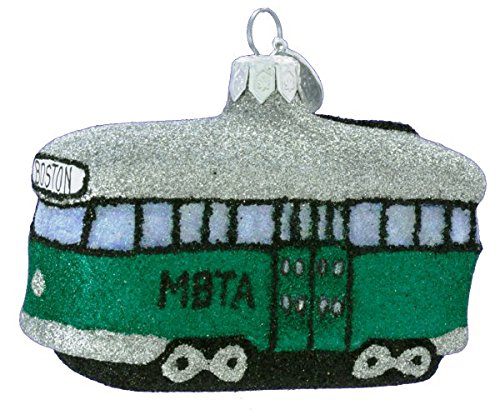 Boston is home to the oldest public transportation system in the nation — in fact, established in 1631, the system is even older than the country itself. At the time, mass transit consisted simply of a family-operated ferry service. The city and its public transportation system grew rapidly and by the 1880s riders complained the streets were so congested they could reach their destinations faster by hopping out and walking along the roofs of all the stalled vehicles. This led to the development of Boston’s subway system in 1897 — the first of its kind in North America. The articulated streetcar also originated here in 1912-13 in response to the challenge of navigating Boston’s maze of narrow streets. The Massachusetts Bay Transportation Authority or “T” is currently one of the largest public transit systems in America, carrying well over a million riders every weekday. This year we have given our MBTA Trolley has had a face-lift! Now decorated in a fine iridescent glitter, this little trolley sure sparkles and shines as it hangs on your Christmas Tree! And adorable keepsake of your trip to Boston. This ornament is hand-blown and hand-decorated in Poland., and will arrive in June, 2013.