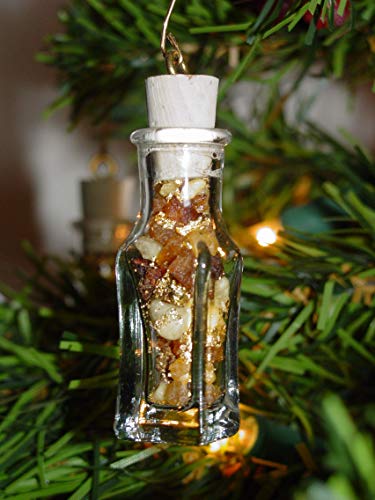 Bring back the true meaning of Christmas with our exquisitely crafted ornament featuring genuine 23k gold, Frankincense and Myrrh, handmade by Mark Wood Willow. The three gifts of the Magi, the most valuable items of the ancient world, are beautifully displayed in an antique style glass bottle, ready to hang on your Christmas tree, wreath or garland. Each ornament is handmade one at a time, and will arrive beautifully packaged in a keepsake box with the image of the Three Wise Men embossed in gold. An information card is also included describing the history and biblical relevance.

The story of the three wise men and their gifts of Gold, Frankincense and Myrrh was illuminated in Matthew 2:11, “… and when they were to come into the house and they saw the young child with Mary his mother, and fell down and worshiped him: and when they had opened their treasures, they presented unto him gifts of Gold, Frankincense and Myrrh.” The gifts of the Magi represented the most valued items of the ancient world for the birth of Christ.

The first gift, brought by Mechior of Persia, is Gold. Valued as currency, it was also the gift given to kings. It is the easiest to identify of the three gifts. Its radiance and beauty was also used in jewelry and other sacred objects.

The second gift of Frankincense, brought by Gaspar of Arabia, is an aromatic gum resin from the Middle East and Africa. It was used in medicines, perfumes and incense, and as an anointing oil with which the priests were consecrated.

The third gift of Myrrh, brought by Balthasar of Ethiopia, is a dark reddish brown resin from a small spiny tree found in the Northeast Africa and Southern Arabia. Myrrh is mentioned several times in the bible for its medicinal uses, and it was the oil that anointed Jesus’ body before his burial and offered to him on the cross in wine to relieve his pain.