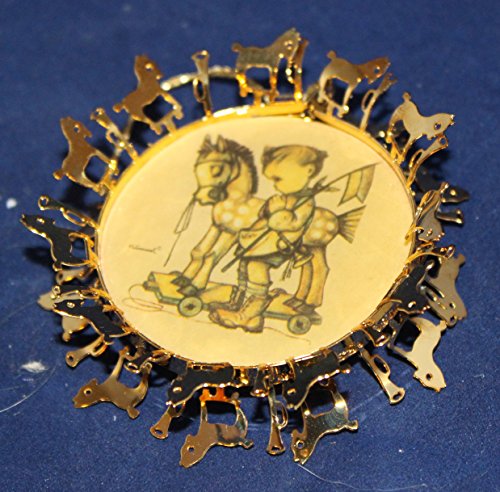 Sister Hummel’s Prayer Before Battle captures the age-old fantasy of little boys playing soldier. Her tiny warrior, in the tradition of the great warriors of history, pauses for a moment to ask for divine protection in the battle to come. Little hands are clasped before him, the tousled head is bowed in reverence. Slung from the moppet’s shoulder is the bugle that will signal the charge. Nestled in his arm is the pennant he will carry proudly into the fray. At his side, his trusty steed, head lowered, eyes closed, joins his master in a prayerful pose. The reins dangle loosely and the pull-rope is coiled before him. Missing from the portrait are any weapons of war. Sister Hummel’s charming fantasy stops short of inflicting harm on one of God’s creatures. It will be a rousing and challenging battle, but one without casualties to man or beast. A beautifully crafted filigree frame enhances Prayer Before Battle. Finished in lustrous 24 karat gold, it features hobby horses and trumpets following the motif of the painting. The ornament is individually hallmarked and registered.