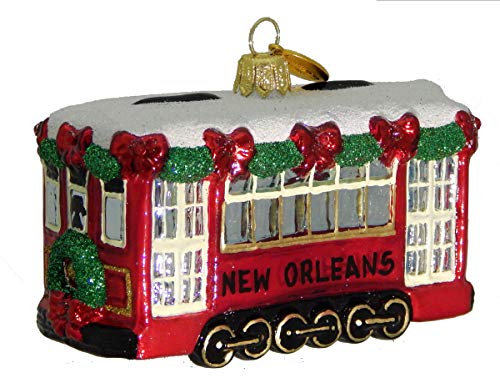 Tennessee Williams’ play, A Streetcar Named Desire, was published in 1947. During this era of post-war prosperity, buses and cars were taking the place of many New Orleans streetcars. Within just a few years, only two lines were left in New Orleans, the St. Charles and the Canal. This was quite a comedown from the streetcars’ heyday, when there were 28 lines. Back then, even the nocturnal Owl service, which ran from midnight until 5 am, was so popular that it prompted one visitor to exclaim, New Orleanians must be human bats! These streetcars seemed to capture the very essence and charm of New Orleans. Symbolically, just as Tennessee Williams’ rough Stanley Kowalski clashed with Blanche Du Bois’ southern gentility, the harsh realities of modern life and technological progress almost put the remaining streetcar lines out of service. Fortunately, a group called the Streetcars Desired saved its beloved streetcar lines. This little trolley is hand-blown and hand-painted in Poland. It comes to you in our custom gift box. 4″ Long