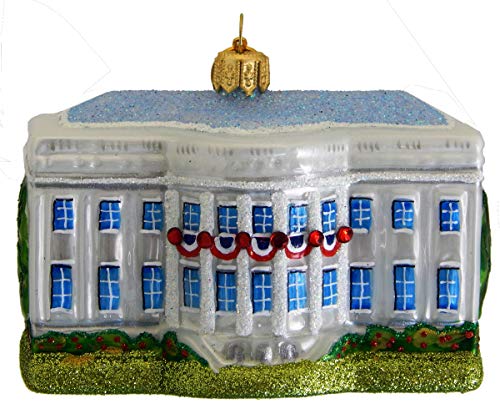 True to the egalitarian spirit of the young country, the original White House architect, James Hoban, was selected through a public contest. It has been the official Presidential domicile ever since John Adams took up residence in 1800. Despite the fact that British troops burned the building in 1814, the White House has been rebuilt, enlarged and refurbished over the years and now contains 132 rooms. Only five of these rooms are open to the public. The building is encircled by over 18 acres of grounds, including the famous Rose Garden as well as the site of the annual Easter Egg Hunt. Over the years, 1600 Pennsylvania Avenue has alternately been known as the President`s Palace, the President`s House, and the Executive Mansion. The building has always been a white house, but it did not become known officially as such until Theodore Roosevelt had this engraved on his stationery in 1901.Our redesigned White House is decorated with all the pomp and circumstance befiiting The Office of the President of the United States, and just in time to celebrate the 2020 election year. It has been hand blown and hand decorated in Poland and comes to you in our signature gift box.