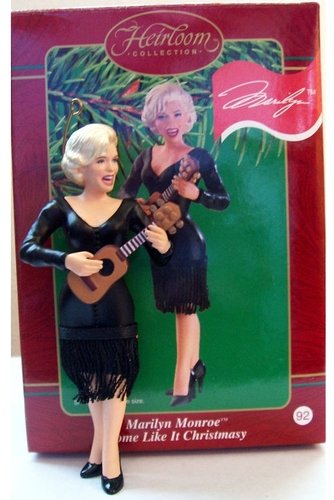 Marilyn Monroe – Some Like It Christmasy 2002 Carlton Cards Christmas Ornament

Marilyn Monroe portrayed ukulele-playing singer, Sugar Cane, in the 1959 Billy Wilder/MGM comedy, Some Like it Hot. She co-starred with Tony Curtis and Jack Lemmon, who played musicians dressed as women to escape the mob. This Carlton Heirloom Collection ornament commemorates Marilyn’s critically-acclaimed performance in one of her most popular comedic roles. Wearing this black dress, complete with tassels, she stole the famous train scene in which she playes her ukulele and sings “Running Wild” with an all-female (almost!) jazz band.