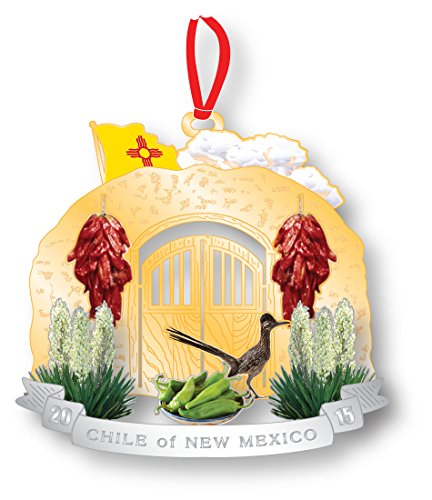 New Mexico is famous for its chile peppers! This ornament highlights the importance of the chile pepper in the diet of the New Mexican. The history of this state vegetable is outlined along with the definition of the word itself. And of course, the famous question, “Red or Green?” is explained in detail. In 1999, the New Mexico Legislature adopted this as it official State question honoring the importance of the chile. The answer to the question is found in the ornament’s information card, so get one today to found out what it is! The concept of the Chile of New Mexico ornament begins with the rich heritage of New Mexico culture. For more than 400 years the multi-cultural influences of Spanish and Pueblo Indians have transpired to the savory flavor of New Mexican cuisine and cultural identity. Additionally, chile production plays a major role in the state’s economy contributing $400 million and 4,000 jobs annually. Whether it’s flame-roasted green chile or fiery red, the significance of chile to New Mexico is as strong as potatoes are to Idaho.