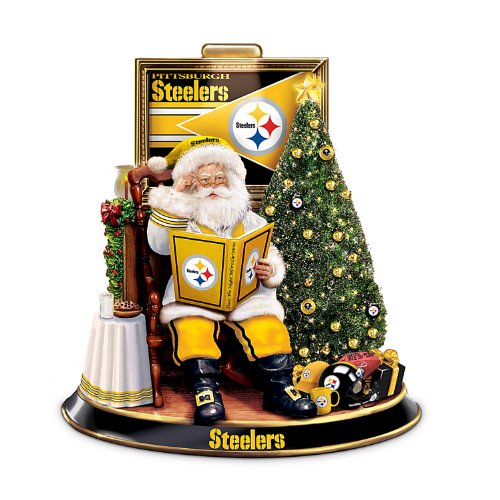 You always knew Santa was a Steelers fan, and here’s the proof! This first-ever NFL Pittsburgh Steelers talking Santa Claus tabletop centerpiece does what’s NEVER been done before: Santa actually recites a clever Steelers version of “‘Twas the Night Before Christmas”! And the festivities don’t end there, because this winning Christmas decoration is loaded with Steelers gifts, logos, colors, ornaments and much more. Officially licensed by NFL Properties, LLC and available exclusively from The Bradford Exchange, this one-of-a-kind Steelers Santa is handcrafted in astonishing detail, from Santa’s soft touchable beard and faux-fur-trimmed Steelers “uniform,” to the real fabric tablecloth beneath Santa’s snacks. Golden light glows from the Christmas tree, the fireplace, and the framed Steelers poster, while holiday music fills the air – even when Santa’s reading. This is the ultimate way to show your Steelers holiday spirit, but strong demand is expected so hurry – order now!