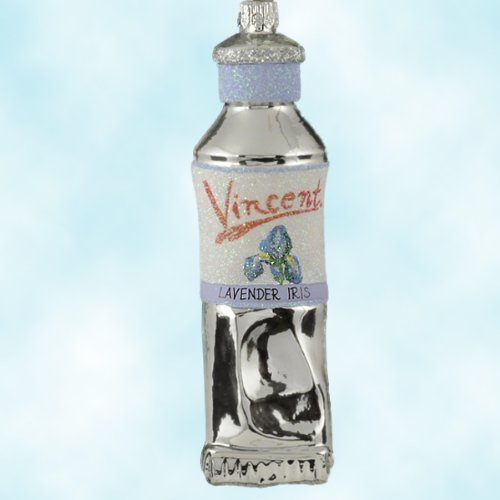 Produced as an exclusive AIC coloration for the “Studio of the South” Exhibit in 2001. A total of 250 were scheduled to be made. However, the ornament was retired and substantially fewer were actually produced.

Titled “Vincent”, after the famous artist, Vincent van Gogh, the ornament features an exquisitely detailed, fully glittered iris on a pearl glittered background. “Lavender Iris” is printed on a lavender band, demonstrating the color within, again repeated in with the lavender glittered band beneath the tube’s cap.

The ornament is so convincing that one is tempted to squeeze the tube to reveal the magical paint color contents within.

Information about the “Studio of the South”:

The “Studio of the South” refers to van Gogh’s dreams to set up a studio with Gaugin in Arles, southern France, a place filled with architecture and antiquities several thousand years old. It was the house that he rented. During the time that van Gogh anticipated Gaugin’s arrival, he painted some of his best paintings featuring sunflowers, filled with cypress trees, and beautifully flowers, in addition to other themes. In 2001, the Art Institute of Chicago celebrated his “Studio of the South” art work with a major exhibit. This Breen ornament depicts the beauty of van Gogh’s work with vibrantly glittered