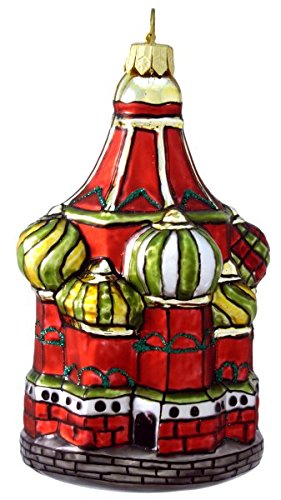 Situated in Moscow’s Red Square for approximately 400 years, St. Basil’s Cathedral has seen its share of history. Napoleon wanted to burn it down, but was unsuccessful. Years later, Joseph Stalin felt that the massive Cathedral interfered with his military parades, but his demolition plans were thwarted by the suicide threat of an impassioned architect. This magnificent church was built in the mid-16th century at the behest of Ivan the Terrible to celebrate his defeat of the Tartars. The Cathedral was designed to replace eight modest wooden churches commemorating successful battles. This resulted in the Cathedral’s famous onion domes -one for each chapel as well as a larger central church. A 10th domed chapel was added in 1588 in honor of Basil the Blessed, a jester who was believed to be the only person able to speak frankly to Ivan the Terrible. St. Basil’s is hand-blown and hand-painted in Poland.