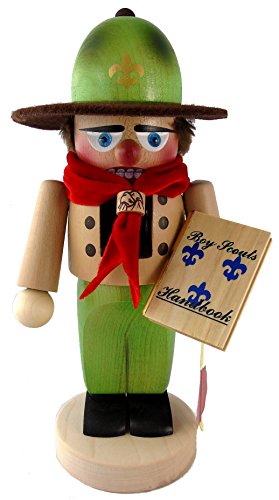 This is a Boy Scout Chubby Steinbach Nutcracker. It is approximately This item was originally introduced in 2002. It is hand crafted in Germany. Excellent detail. It is approximately 10.5 inches tall. Comes in the original box with a certificate of authenticity. Steinbach Chubby Nutcrackers were first introduced in 1992-94. These designs were first referred to as “Juniors”. The name Chubby nutcrackers has now stuck and they represent some of the most popular of Steinbach nutcrackers. For most of two centuries the Steinbach family has been producing fine wood products: nutcrackers, smokers and ornaments. Previously under Christian and then Karla Steinbach, today, Herr Ricco Paul heads the operation carrying on this name and tradition from the Erzgebirge region of Germany.