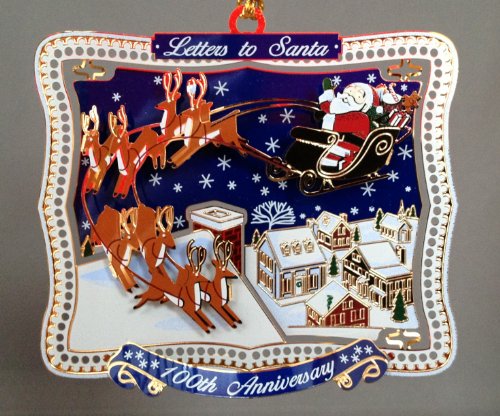 From Enclosure Card: “Every year at Christmastime, the United States Postal Service received hundreds of thousands of letter addressed to Santa Claus, North Pole. In 1912, Postmaster General Frank Hitchcock authorized postal employees to work with individual U.S. citizens to help Santa with all these letters. Later, in the 1940’s businesses and charitable organizations were invited to participate in what had become the Letters to Santa program.

Through the Letters to Santa program, the Postal Service also helps to promote literacy. Written and sent with adult help, children’s letters to Santa are often their first written correspondence.”

In 2012, “the Postal Service is celebrating the 100th anniversary of the Letters to Santa program, as it continues to fulfill the dreams of children nationwide. Some local Post Offices assist Santa by responding to letters. Others work with groups to collect gifts. Still others invite the public to help Santa answer the letters from children and their families. One hundred years later, volunteer postal employees remain committed to making children’s Christmas wishes come true.

The 2012 “Letters to Santa” ornament celebrates the 100th anniversary of the program, and features Santa and his reindeer on their way to deliver presents to children throughout the world.

Letters to Santa is an annual Holiday tradition embraced by the U.S. Postal Service and the public alike.”