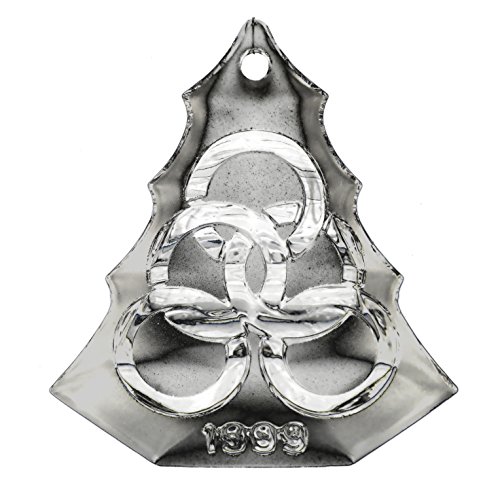 12 Days of Christmas 1999 Limited Edition Crystal Christmas Ornament. 5th Edition of the Second Series. (1995 – 2006) The Twelve Days of Christmas is a sparkling series of Waterford Crystal giftware that commemorates the rich history of one of the world’s best loved carols. First published about 1780, this folk carol celebrates the festivities of the Twelve Days, the days between December 25 and Ephiphany, January 6th, when the three Magi presented the first Christmas gifts of gold, frankincense and myrrh. During the Middle Ages, nobles and peasants alike sought to extend the joyous Christmas celebration from just one day to all twelve, and gift-giving on each of the twelve days was not unusual. At the height of its popularity, The Twelve Days of Christmas became a popular game song, with groups of adults and children repeating all of the lines in turn until someone missed a lone. That tradition continues today with the continued popularity of singing the song as a game. In celebration of this charming carol, each year an ornament, bell, and plate are added to Waterford’s series of designs. Each design symbolizes the popular lyrics of the song.