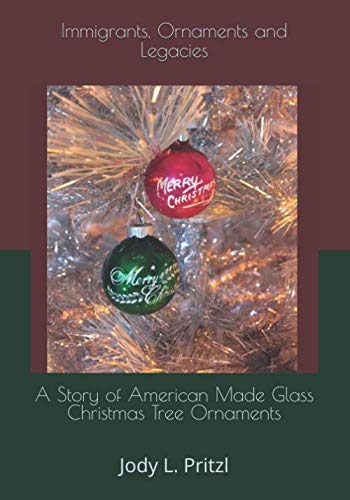 Immigrants, Ornaments and Legacies: A Story of American Made Glass Christmas Tree Ornaments

“Immigrants, Ornaments and Legacies” tells the stories of the companies who created 20th century Christmas tree decorations. The Shiny Brite™ story of Max Eckardt and Sons is chronicled along with rival firms that competed to win the key customers of Woolworth’s and Sears. Bernhard Wilmsen was one of the first Christmas vendors to Woolworth’s and continued to be for decades. George Franke emigrated from Germany to America at the time of the U.S. Civil War and employed hundreds of people in Baltimore, Maryland. National Tinsel Manufacturing in Manitowoc, Wisconsin would be a recognized Christmas industry leader until a 1991 merger worth $90 million. Before millions of Christmas bulbs were manufactured and sold in America, thousands were imported by Woolworth’s and Sears. Beginning as a family business in Lauscha, Germany many husbands, wives and children hand crafted glass ornaments. As early German immigrants came to the United States they evolved the industry with inventions and patents. Survival and prosperity were never guaranteed as the companies struggled during precarious times of tariffs, trade wars and world wars. If not for Corning Glass Works inventing the means to make 80 million glass bulbs a year, the modern era of Christmas tree decorations would have stopped with German blockades and boycotts. With rich details using photographs and statistics, the industry of American glass bulb Christmas ornaments is documented from the 1800’s to the 1960’s. In their own words, family descendants of ornament makers tell their favorite memories of being surrounded by Christmas all year long and their special holiday traditions that live on today. “Immigrants, Ornaments and Legacies” is a family centered story of decades of Christmas tree decorations that are highly collectible today. An ornament identification section is included to help collectors date their precious Shiny Brite™ and George Franke ornaments passed down lovingly from generation to generation.